Happy 4 year anniversary to Plug and Play Japan! 4 years ago on July 14th, we officially established our entity in Japan.

There is much to reflect on how Plug and Play has evolved over the years but also how the startup ecosystem in Japan has drastically changed as well. We set out with a mission to make as big of an impact as we can to this ecosystem and on the way have met so many people with the same vision. First, I would like to take this moment to see how we arrived here.

Back in 2017, the startup and open innovation boom was quickly rising in Japan and we wanted to seize the opportunity to build our office with the potential to grow into one of the major innovation hubs in the country.

You can say the startup ecosystem in Japan was beginning to blossom but was not prominent or nationally recognized as a substantial one at the time. There were enough startups, venture capital and supporting stakeholders to recognize the trend had hit Japan as it did in so many other countries around the world, but the overall activity was small compared to its counterparts.

This is maybe why when our launch event in 2017 was picked up by national television, they were quick to label us the “Startup Support Black Ship” as the whole startup movement in Japan was still very much domestic focused and we were there to change that.

The term “Black Ship” refers to the series of ships landing in Japan, namely led by Commodore Perry’s Expedition that saw his 4 ships reach Japan in 1853, ending a 250-year national seclusion. Coincidentally the date that Perry and his crew were allowed to land was July 14th, the date in which Plug and Play Japan’s entity was established.

We had mixed feelings with this moniker as the black ships were viewed as potentially hostile as they pressured Japan into opening their country to trade. On the other hand, we felt proud that we were being compared to such a historic occurrence which overall had a huge impact on Japanese modernization.

Fast forward 4 years later to today, and we have accomplished many feats.
Carving out just this past year, and despite the difficulty throughout this crisis, we have had some major highlightable achievements. Last August we launched Plug and Play Osaka, our third office and Smart Cities program, our seventh vertical accelerator at the time with our 7 founding partners. In September, we hosted STAGE, a hybrid online/offline event bringing together startups and investors outside of our accelerator community. We ran and completed two terms of fully online accelerator programs that saw record number engagements between startups and partners during the 3 month span. Just last month we held our first large community event, PLAT, in which we invited all of our previous program alumni and partners to pitch and share some of our recent success stories.

To date, we have accelerated over 600 startups in our programs across our 9 vertical programs across 3 of our offices in Japan, Tokyo, Kyoto and Osaka. Around half of these are domestic startups while the other half come from all corners of the world. We have partnered with 61 corporations in Japan to date, supporting these companies with their open innovation strategy and introducing them to the startups. We have made 6 startup investments into what we think will be global businesses. We have made many other countless partnerships with Universities, Governments and more, to realize our mission of creating the largest innovation platform in Japan. Our team that supports this has grown from 1 to 44 full time employees across the 3 offices.

At the same time, we also like to reflect on how Japan has advanced its startup ecosystem in the last 4 years as well. Tokyo went from being not recognized as a rank-able startup ecosystem city back in 2017 due to not enough data and activity, to being typically ranked between the top 15 – 20 ecosystems in the world on various ecosystem rankings. Cities like Kyoto, Osaka, Fukuoka, Nagoya also have become recognized both domestically and internationally as up and coming ecosystems as well.

Many Universities began doubling down on their entrepreneurial education, startup incubation and funding. National and local governments increased their number of initiatives immensely with projects such as J-Startup that was created 3 years ago to support top domestic startups that challenge overseas markets. Most importantly, we have seen the change in mindset of the people in Japan shift from skeptical to urgent when working with and creating startups. Massive funds have been created over the last couple years with larger rounds of investments to domestic startups with even some participants from overseas investors. With COVID-19 drastically accelerating the need to go digital, we feel Japan is reaching its tipping point when it comes to reliance on startups. We are all familiar that crisis breeds innovation and will look at the business created in Japan post COVID-19 as some of the leading businesses of the future.

We look around today and see the greatest number of startup accelerators, incubators, venture capitalists, co-working spaces, and many other startup support stakeholders, with many more of them global companies creating offices in Japan. We are now more excited than ever about the potential of quality and quantity innovation seeds that are being created here.

Our anniversaries at Plug and Play Japan is an opportunity to look back on how far we have come and at the same time appreciate the people that have contributed to this journey. We would like to thank all of our partners, startups, supporters, friends and family within the Plug and Play community and beyond that has in one way or another created a positive impact to the startup ecosystem. Our company and community exists so that we can all learn, share and give back to each other to make each other stronger.

Innovation requires impetus. Plug and Play will continue to create movements, build bridges, break barriers, empower individuals so that innovators can continue to do what they do best. 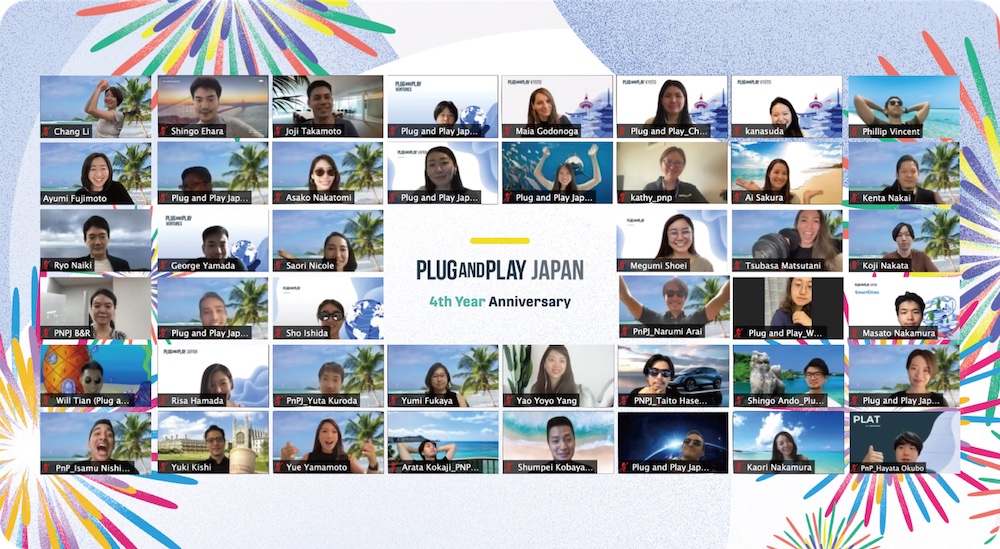