Biotechnology is expected to be a driver of the Fifth Industrial Revolution (5IR) in a myriad of fields such as health, medicine, food, energy and chemicals. The Cabinet Office of Japan is promoting a biotech strategy with the goal of realizing the most advanced bioeconomy by 2030. We interviewed Masashi Shimizu, the founder of Microbiofactory, who is aiming for sustainable development and the ability to “cure the diseases of the earth.”

Born in Gifu Prefecture, Shimizu graduated from Tokyo University of Science with a Master of Engineering degree in 2013. In 2014, he joined Green Earth Institute, a company that produces useful materials from biomass resources, and was engaged in R&D and business planning. After leaving the company in 2018, he established Microbiofactory Inc. and became its CEO. He is working on the material production of aromatic compounds via microbial fermentation and the use of genetically modified microorganisms.

ーー Please tell us how you started your company.

When I was a university student, I took a class on entrepreneurship and became interested in the idea of doing business on my own. I wanted to start my own business in the field of biotechnology, but biotechnology is expensive and time-consuming. Thus, I started out as an employee working for a biotech startup called Green Earth Institute, where I encountered the foundation of our current technology. I thought that I could leverage the experience I had gained in the workplace, so I began my own company.

Around 2018, there was a startup boom, and I simply thought, “If I ride this wave, it will work out.” But it was not so easy. However, we are seeing a lot of good research results so it’s up to us to figure out how to implement them in society.

ーー Why did you become interested in synthetic biology among the various fields within biotechnology?

I actually studied biology at university, but at that time I was more interested in research and development than medicine. However, I believed that it would take a long time to bring research results into fruition in the medical field. I thought it would be interesting to work with microorganisms because they produce research results much faster than cells.

Secondly, at that time, society was starting to recognize environmental degradation as a serious problem. When I thought about curing human diseases versus “earth diseases” such as global warming and environmental pollution, I thought that curing the latter would lead to sustainable development. There are already many researchers working on human diseases, so I thought that there would be a lot of competition if I were to enter that field now.

Regarding hydroxytyrosol, a chemical company in my network advised me that if I could produce hydroxytyrosol at a more competitive price, it could be used as a raw material for adhesives. When we looked into it, we found that there were no similar chemicals on the market, and if we could use biotechnology for industrial products we could dominate the market at once.

As for indigo, we actually did not intend to make it. However, we accidentally created the bacteria that produce indigo while we were developing microorganisms for hydroxytyrosol production. After researching environmental issues and the apparel industry and the market, I learned that indigo is currently made using petroleum and there is a need for indigo that is not produced using fossil resources. We began to focus on developing this idea further.

Indigo is chemically synthesized from carcinogenic materials at production plants, so there is a high risk of cancer for plant workers. Another issue is that the wastewater from dyeing factories kills organisms in rivers. I learned that in the apparel industry, indigo is an undesirable raw material from these two perspectives of environment and safety.

*1 Hydroxytyrosol: A type of polyphenol found in olives that has antioxidant and antibacterial properties. It also contains catechol groups with adhesive properties.

*2 Indigo: A plant-derived dye mainly used as a dye for jeans. 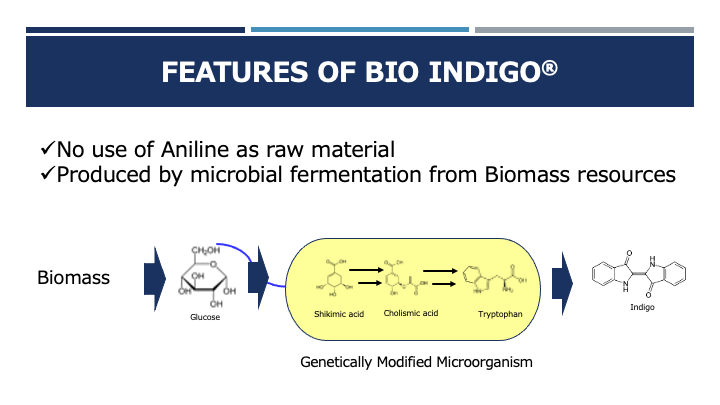 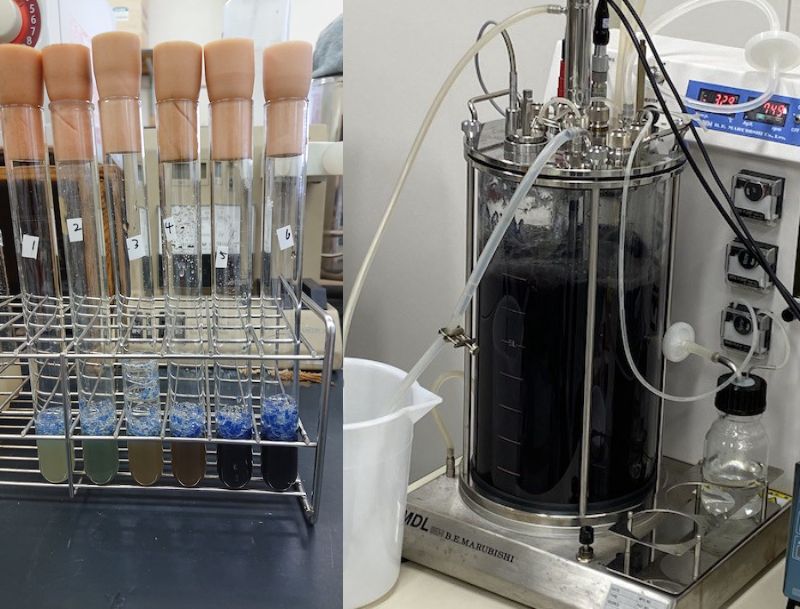 ーー What are the uses and properties of hydroxytyrosol?

Hydroxytyrosol is a substance found in olives, but it is not yet used as a stand-alone compound. It is used in foods and cosmetics as an olive extract, and is also an added ingredient in health foods.

Some companies around the world are realizing the functionality of hydroxytyrosol, and are trying to produce a pure version to add to foods and cosmetics. Hydroxytyrosol is also garnering attention as an adhesive compound. So, our company is targeting those fields as well. We believe that our ability to reduce costs using biotechnology is a key selling point. 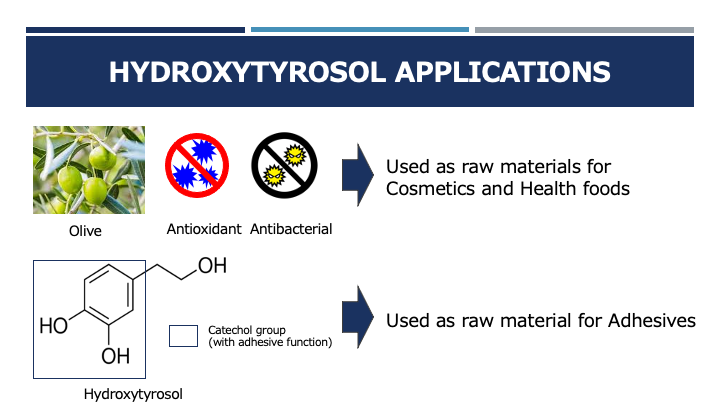 ーー Recently, various synthetic biology startups have emerged, but it seems that they are similar in terms of their core technology. How do you differentiate from competitors?

There is also the point of which compounds we produce and offer. Even if we use the same fermentation methods to produce something, the market and approach are completely different depending on whether we are aiming for PET bottles, dyes, or food-related materials. The market a company chooses to target is therefore a major differentiating factor.

We envision the future where we will be able to create the microorganisms that allow us to creatively combine many different genes to produce certain substances. What we are aiming for is to develop our methodology in gene optimization.

ーー What is your vision for the future?

We would like to develop two business models. One is to find compounds that we think will sell well and create them ourselves. The second is to work with companies and use our biotechnology to produce compounds that fit their needs.

As an example, we are looking at businesses such as Genomatica. Genomatica is a startup that is doing something similar to a chemical factory, but using biotechnology. Our company is also aiming for this, so we are observing various trends.

What I expect from the Plug and Play Japan program is to find partners for joint research and PoC. We are also looking for investors, of course.

ーー Are you thinking of expanding your business overseas?

I have heard that foreign chemical companies are investing more in biotechnology than those in Japan, so I’m hoping to partner with companies overseas. As for our indigo production, we will of course continue to produce raw materials, but we are also thinking about what kind of products we can make with the dyes we produce. In that sense, it would be best if we could work with European apparel manufacturers.

To learn more about Microbiofactory Inc, please check their website.