Mitas Medical is a startup that offers remote eye care devices. Their portable slit-lamp microscopes allow general practitioners to scan the eye’s surface with a smartphone camera and transfer the images to ophthalmologists. It is expected to enable rapid diagnosis and prevent diseases in rural areas without specialists. Dr. Naofumi Kita, a former clinician who founded Mitas Medical, talked about the experiences that made him become an entrepreneur.

ーーWhy and how did you start your company?

I have been working as an ophthalmologist for 12 years. Early in my career, I was working at a hospital in Hokkaido. In the winter of my first year there, an old lady came to the hospital accompanied by her neighbor as she has been suffering from eye pain for three days. She was diagnosed with a disease called acute angle-closure glaucoma. It often causes blindness if left untreated for a day or two. Unfortunately, her both eyes had already gone blind by the time she was treated.

Why did it take so long for her to come to the hospital? Actually, she has been to a local clinic in her mountain village on the day she had developed the symptom. And the general practitioner who primarily examined her told her to see an ophthalmologist if the pain persists. However, since it was the wintertime with heavy snow, she was reluctant to go to a hospital and endured the pain, which led to the tragedy.

From that experience, I learned that some people could fail to reach ophthalmologists and have a risk to go blind even in this advanced society. If an ophthalmologist were able to see an image of the patient’s eyes there, he or she could tell the patient to go to the hospital immediately. So I started to think about how we could prevent a tragic case like that. I thought we can save patients like that old lady if we could create a system that instantly connects non-specialized doctors with ophthalmologists.

Also, there is another thing that inspired me. I used to be working at a big hospital with about eight ophthalmologists. I was in charge of house calls for two years. I used to visit patients’ homes, care facilities, and hospitals to see bedridden patients. If there had been no house calls, those people would have had a lot of trouble seeing an ophthalmologist as they need to arrange transportations and caregivers. I came to realize that there are a lot of patients in such circumstances not only in rural areas but also in cities. These two experiences made me come up with the idea of creating a remote eye care device for non-specialists.

From Ophthalmologist to Entrepreneur: The difficulty of expressing a new idea and involving partners

ーー How did you develop your device?

At the concept stage, we thought about what kind of device would be the best to attach to a smartphone, and we made a prototype with 3D printing. After a couple of remodeling, we obtained a patent and consulted with the chief professor of the University of Tokyo’s Department of Ophthalmology. We asked him if there was any good company to collaborate with to make the device. He introduced us to Takagi Seiko, which is the world’s leading manufacturer of slit-lamp microscopes providing to 70 countries and has the third-largest market share in the United States. We made several prototypes with them and settled on the current form. 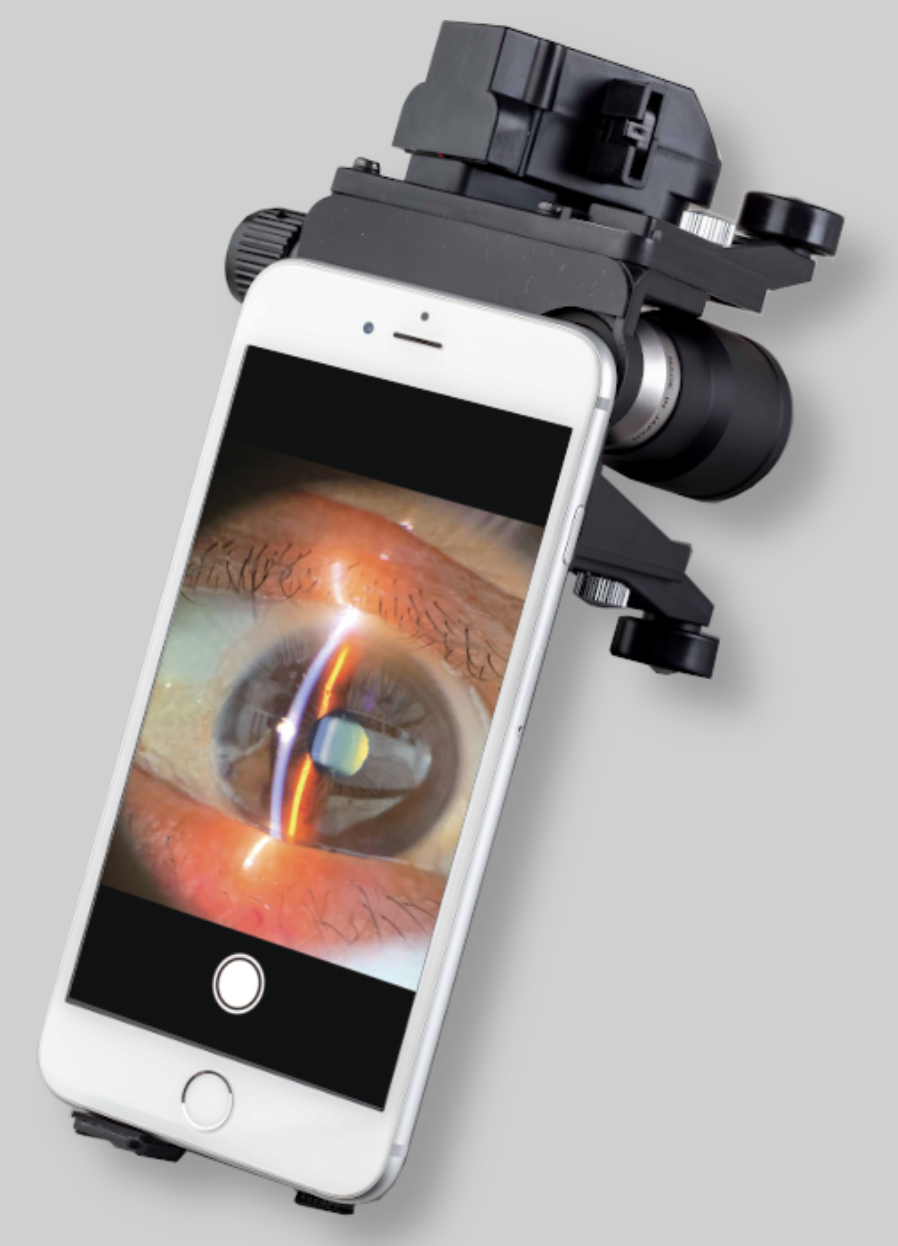 ーーWhat were your challenges after starting a business?

The hardest part of starting a business is to sell your idea to the people around you and get them involved. In general, a goal for ophthalmologists is to give an accurate diagnosis and convince patients how to treat them, so there are relatively few people involved in the decision-making processes. But starting a business is different. For example, it took us about a year to create a prototype. We had to describe our concept to a manufacturer from scratch since they have never seen such a product before. Also, since I had been an ophthalmologist myself all my life and never dreamed of starting my own business, I felt I needed to learn certain business skills. So I went to Globis University Graduate School of Management, and got help from many people around me. I know I still have a lot to learn to improve the business, but I try to stay optimistic to get things going one step at a time.

ーーAs you enrolled in the accelerator program, what do you expect from Plug and Play?

We have a couple of ongoing domestic projects, and we need the first achievement. We would like to take advantage of the connections we could get while we are in the Plug and Play’s program.

ーー One of the uniquenesses of Mitas Medical was a PoC project in Mongolia. Why did you pick Mongolia for a location?

We thought there must be a need for a remote diagnosis. Mongolia is a country whose land is about four times larger than Japan with many nomads, and its population density is one of the lowest in the world. It means one Mongolian ophthalmologist has to cover the largest area in the world except for Africa. In Africa, some countries have only a few ophthalmologists in the entire nation which would be too sparse for our experiment.

In Mongolia, most of the 120 ophthalmologists are in the capital city, and there are only one or two ophthalmologists in rural provinces. For example, in one of those rural provinces, the nearest clinic is about 300 km away and the roads are not well maintained, which means people have to spend about six hours to get there. This environment made Mongolia a country with a very high rate of blindness. The acute glaucoma attack is a common disease in people with good eyesight in the countryside rather than urban residents. Mongolian people often have good eyesight, which makes many of them go blind ironically. It proved to me that the need for remote diagnosis was indeed very high.

There is only one national medical university in Mongolia, and when I met with a professor there, there was a map of the whole country in the room. Showing me the map with pins on places where there are ophthalmologists, the professor told me that there are regions in Mongolia that don’t have any ophthalmologists, so my product is very much needed in Mongolia. We started to introduce our product to the provinces where the demand was particularly high. The professor was really supportive, and she repeatedly urges us like, “Which province are you going next?” 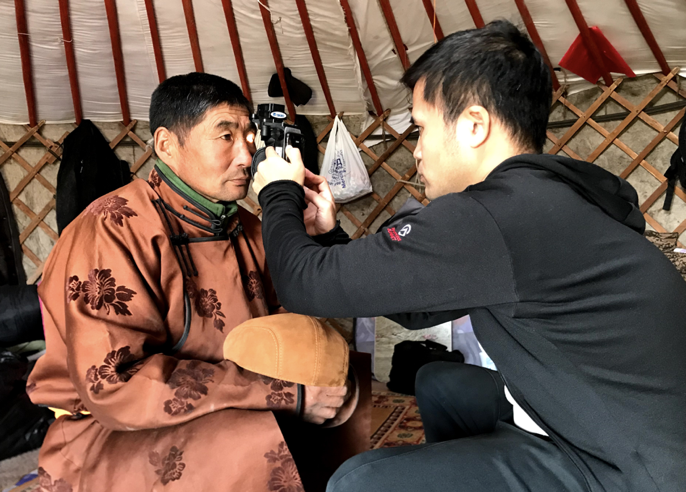 ーー I heard that the product can also be used on animals.

Yes, many animals suffer from eye diseases. Dogs and cats also have eye diseases similar to humans such as cataracts, and we can examine many diseases with our devices. I hope to expand the business in that field in the future.

We are still in the pre-series A stage and exploring product-market fit. We are hoping to focus on where it fits best.

Eye diseases are a universal problem. I would like to start with markets outside Japan and then expand domestically. In the future, we want to create a world where we can easily reach appropriate medical care in Japan and anywhere in the world. We would like to work with companies which understand our vision and are willing to invest in us.

All photos are provided by MITAS Medical Inc.